It’s no secret that deer are my favourite subject for local wildlife photography. I’ve accumulated a decent portfolio of deer images over the last few years, but I’m always looking to add something new to what I’ve done before. I try to visit the deer throughout the year but the best time to go is during the rutting season, and this post is a collection of images from this year’s red deer rut.

Each year in early October, the males separate themselves from the herd, lose their usual timid disposition, and set out on a mission to prove they’re the strongest stag around.

Of course, predictably, this is all in the name of impressing the ladies. The hinds seem partly impressed and attracted to the largest and loudest males, but also quite intimidated. Frequently you see males appearing to chase after, and round-up females, who it appears would rather wander off and eat somewhere else. But the persistence of the males makes it easier for them to just hang around with a stag, rather than keep trying to avoid them. 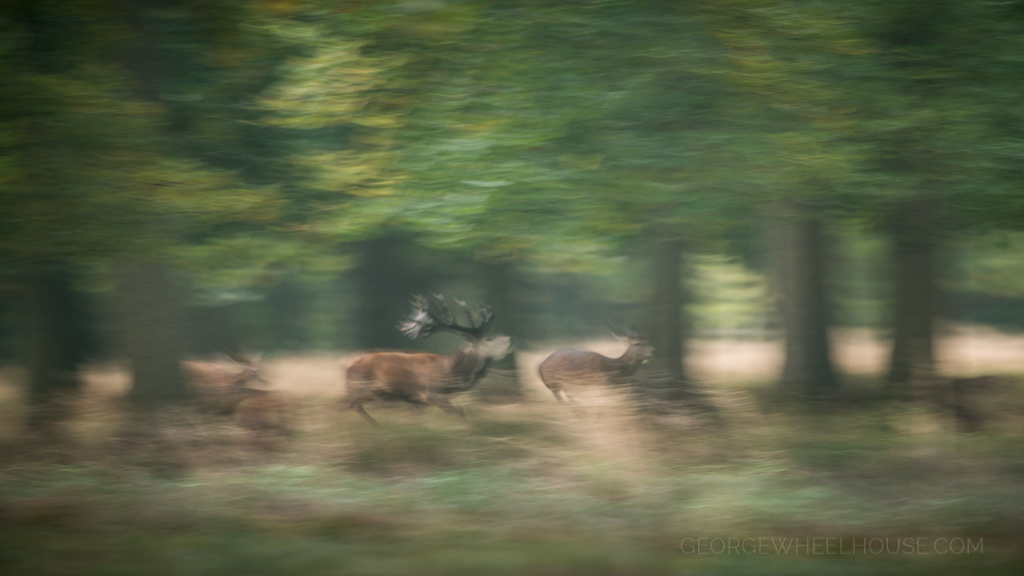 When the stags aren’t around, the scene is considerably more peaceful…

The males will let out a deep bellow, in an attempt to woo the females, and to intimidate rival males. As the red deer rut reaches its peak, this calling is almost constant, and the chorus appears to come from everywhere around.

This year, more than ever, it appeared as though the stags were intentionally selecting trees to stand beneath, in order to increase the depth or the volume of their bellow. I noticed this on several occasions, and the additional echo really seems to help compared to calling out in the open.

I had a few shots in mind to achieve this year, and I got some of them, but others will have to wait for another year. I’ve already got so many different types of deer photos, that I really try hard to get something different from the mainstream. One theme I kept persisting with this year, was slow exposures and motion blurs. I made a half-hearted attempt at these a couple of years ago, but when the best opportunities arose, I always reverted to getting a safe shot in the bank. This year, I was quite strict, and I think it was worth it. I didn’t get anything amazing, but it’s a style I like, and I think I can do more, and better with it in the future.

Silhouettes are very effective in photography, for a simplified view of a recognisable outline. Simplifying scenes seems to be a common thread in my photos, and I’m certainly no stranger to deer silhouettes. I didn’t get many this year, as I was largely targeting other shots, but I got a few. This one’s probably my favourite…

I also managed to witness a proper fight this year. I’ve been visiting Woburn Deer Park for the red deer rut for the past 7 years, and this was the first time I’ve seen two large stags seriously battling for dominance. I’ve seen them sparring on occasion, but that tends to be the younger deer, and it’s never serious. This one was the real deal. Two groups of females wandered close together, and the males controlling each of those groups locked antlers without hesitation. Being something I’ve thought about for a long time, I was relieved to find that when the moment came, I clicked into gear quickly, and managed to get some photos. They’re not amazing; they weren’t very close, and the background isn’t all that great, but I’m pleased to have managed some.

It was pouring with rain, and I was the only idiot out taking photos in that weather, so I had the view all to myself.

The fight only lasted around 90 seconds, which was a shame for me, but both stags were breathing hard afterwards. As the winner rejoined his harem of females, the loser set a direct course for me! I got as low to the ground as I could to take some portraits as he approached, then I retreated to let him pass. Thankfully, he didn’t detour towards me, and he carried on through where I’d just been crouching.

As it stands at the moment, I don’t think any of this year’s red deer rut photos are going to make the grade for my deer portfolio. I got some nice photos, but nothing really improving on what I’ve done in the past. That seems like a shame, and it is in some ways, but I chose to put a lot of time and attention into experimenting with more original ideas this year, rather than retread old ground. And I don’t regret that decision just because I didn’t nail the shots I had in mind. I’m still encouraged enough to continue with those ideas next year, and hope to pull off something interesting and original. I guess at this stage, I’m happier turning down the easier / repeated shots in order to gamble on new ideas, and invest time learning some new techniques.

If you like my deer photos, you can see my favourites here, and a whole library of them over on Flickr.

If you found this blog interesting, or you liked the photos, you can share it yourself using the handy links below 🙂 Or you can subscribe to future blog posts using the box in the footer of the page.