After last month's web-hosting grumble, I wanted to write a positive post this time around. I've been thinking for a while about how to go about writing a post like this, with a brief explanation of the people who inspire me, and who I think have had a direct influence on my photography.

I'm not exactly into celebrity culture, but I do take inspiration from all kinds of people in the media, TV, books, and online. Some are photographers, some artists, some household names, and some lesser known, but all have had an effect on the way I see the world, and what I want to spend my time doing.

It's hard to start anywhere else really. I'm not even sure I need to add anything more either. The name alone conjures a kind of gravity and weight of credibility rare amongst those in the public eye. A couple of years ago, I went back and watched the entirety of his landmark BBC series', starting with 1979's "Life On Earth", which was an absolute masterpiece. Over 13 episodes Attenborough patiently walks the viewer through the history of life on earth; where it began, how it evolved, and how each environment came to be; sculpted and conquered by different animal groups over millions of years. Sadly, I think the pace of the show is such that it would never make it to air these days. But as a complete lesson in the natural world, it's almost unsurpassable. Since then, he's continued his quest to inform and enthrall the public with his later series', and has obviously achieved 'national treasure' status in the UK. He's also made the time for tireless campaigning for the protection of nature and wild places. All his series are carefully designed to make a point, and encourage viewers to become more engaged with nature. He's also a man of science, and his opinions and statements are always very well informed and backed up with evidence. 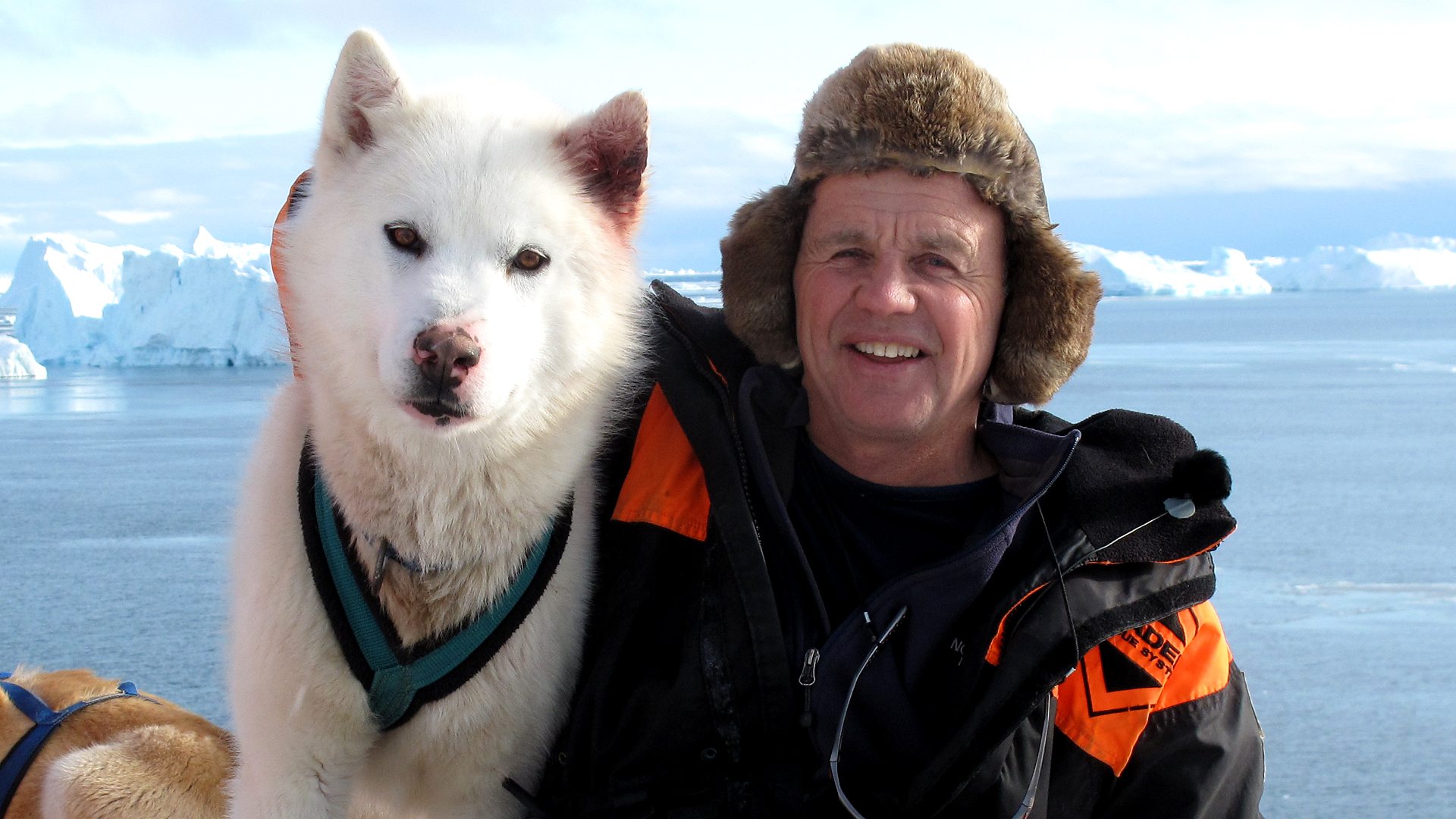 Doug AllanCamera man Doug Allan If you don't know the name, you might know the face. If you don't know the face, you might know the voice. If you don't know the voice, you'll definitely know some of the wildlife sequences he's brought to our screen!
If I was in a band, I'd like to be a drummer; Out of the limelight, but a solid team member. I couldn't be a figurehead like Attenborough. He's front-man material. And for all his qualities, Doug Allan appears to shun the limelight too. But the shots he contributes are truly spectacular. The lengths he goes to in order to film his documentary scenes are quite incredible, and totally enviable. Weeks in a hut in the Canadian arctic, for example, looking for polar bears. Or diving for whales day after day for the sake of a 10 minute feature. When you think of the great Attenborough series', and your favourite moments from them, the chances are Doug Allan was the man who filmed it. He sometimes appears in those 10-minute making-of sections at the end of an episode, with a cheeky grin, a positive outlook, a sense of humour, and always an admirable modesty.

Ray MearsRay Mears Amongst Mears' qualities, of which there are many, I enjoy his apparent disinterest in modern culture. It's not an overt dislike or a fierce rejection, just a quiet dismissal of modern assumptions. He's clearly drawn to time away from the modern world, and finds peace amongst the some of the remaining areas of wilderness. He's a great advocate for spending time amongst nature as a therapy for mind and body. He completely shuns celebrity culture. When you hear him interviewed he speaks with such considered words, in a clear assured tone, totally free from hyperbole. His Desert Island Discs was a great insight into the man himself. We also share a love for the boreal forest, which covers a vast area of Northern countries such as Canada and Scandinavia. He inspires that sense of adventure in me, to look beyond the obvious destinations, and take the path less travelled. He also shares his interest in ancient native cultures very eloquently, and brings their techniques to life in new and engaging ways.

Bob RossBob Ross painting I'm a relative newcomer to the phenomenon of Bob Ross, but I was hooked almost instantly. He's so kitchz it's hard to take him seriously at first, but his cult following doesn't purely rely on irony and amusement. It's impossible not to take something from his infectious enthusiasm and positivity. He constantly encourages others to enjoy creating art, speaking directly to viewers with phrases like "I know you can do this". It's madness, as he doesn't know me at all, but I love his keenness to encourage an enjoyment of the artistic process amongst everyday people - not just those who consider themselves artists. Given half a chance I think the art community could well become so insular that it never reaches out to the wider population, but Bob Ross seemed to make it his mission to connect with the mainstream. This chimes with me as, despite having a foot in the so-called 'fine art' community, I want to keep my photography accessible to everyone.
I can't say Bob's paintings are really my kind of style - The colours are pretty OTT for my taste. But one skill that particularly interests me is his knowledge of composition. In my opinion, he's a master of composition; particularly with his use of 'S-curves' leading the eye through the picture, from foreground interest, middle-distance, to background. He then packs points of interest around those curves so that each space on the canvas is used to add content and context to the image. Of course as a painter he has the ability to place these features where he wants, but as a photographer it's still great practice to see these compositions come together, and learn to seek them out for myself when in the field. For example, using trees at either side of a landscape, to frame the content. It's a classic Bob Ross technique, and it's something I can look to use in my landscape photography too. 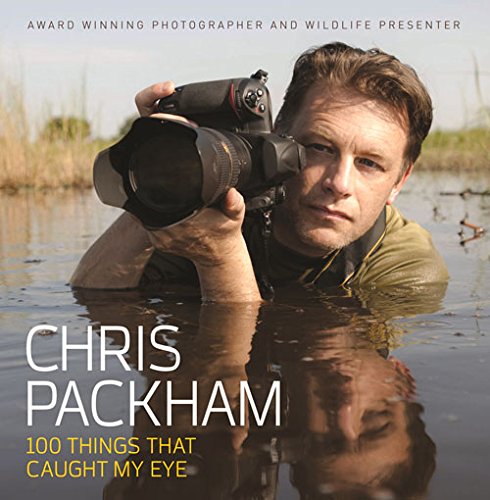 Chris PackhamChris Packham - 100 Things That Caught My Eye I'm the generation that grew up with The Really Wild Show and then got to rediscover Packham as an adult, during his more recent renaissance.
I have huge admiration for his steadfast commitment to science and reason, and his obsessive thirst for knowledge. His comments have courted controversy on a few occasions, but they're always rooted in ecological understanding and backed by scientific rigour. He's an excellent communicator of ideas and concepts, and does a great job of explaining the natural world to those watching on. He's also a great ambassador for numerous wildlife charities and good causes, which tie in perfectly to the messages he puts across on screen.
In addition to admiration, I also really identify with the way he seems to think. I see in him the same pursuit of artistic perfectionism, impossibly high standards, and resulting anxiety that I feel myself. Granted, the standards he achieves are far higher than me, but the point is he'll never reach the goals he sets himself. He'll never take that 10/10 photo - and he'll probably never see one either. He's also very literal in his communication. He says what he means, and he means what he says. Even the book title "100 Things That Caught My Eye" is spectacularly literal. I have this book myself, and I just had to share a quote from it, which perfectly conveys my innate feelings towards art and photography...

- "You have to microscope your images and you need to savage them with relentless self-criticism. Only then will you generate the desire to keep on and on trying to improve your photographs, attempting to one day attain that purely mythical perfect picture. It's tough; it's a recipe for a life of brutal dissatisfaction; it makes what for some is a nice hobby or enjoyable profession a frustrating and even miserable arena for self-recrimination. But then think of the alternative - you like your work, you think you've cracked it, get smug and cocky and then lazy. You may as well run a bath and dump all your gear in it. Nothing as disappointing as the attainment of a dream."

Nick BrandtA Shadow Falls I encountered Nick Brandt's African wildlife photography 10 years ago, and it was a key trigger to my first steps in photography. It hit that perfect blend of natural history documentary and artistic endeavour, and struck a real chord with me. It was still another couple of years before I invested in my first proper camera, but these images planted the seed in my mind that maybe photography could be the creative and artistic outlet that I needed.
Since then Brandt has managed to extend his on-going project with increasing relevance, darkness, and poignancy. His latest chapter "Inherit The Dust" is a striking continuation of the narrative, and a masterpiece in social commentary. It's hugely inspiring to see someone continuing to create art which is not only visually and aesthetically engrossing, but also politically engaging and thought-provoking.
I have a couple of his books and they're treated like holy manuscripts in my house!

Larry DavidComedian Larry David Yes, that's right, it isn't all about nature and wildlife. Despite my own tiresome prose, I'm an avid comedy fan, and I'm definitely influenced and inspired by the writers and comedians I enjoy. As a writer, Larry is continuously innovative. You can see that him & Jerry are learning on the job through the early series' of Seinfeld, which makes his progression all the more relatable. Once they find their feet as writers, the show goes on to pretty much define how the modern sitcom works. But he didn't stop there. After co-creating/writing Seinfeld, Larry doesn't need to continue working, but he obviously still has the drive and the desire to continue creating original work. To still be generating funny, current, and relevant social commentary well into his 60's is great encouragement to never rest on your laurels, and to continuing employing that creative streak.

The main point of this post was to recommend these people to anyone unfamiliar with them. So if there's a name or a face here you weren't previously aware of, do have a search around online for their stuff, and hopefully you'll feel the same enjoyment, inspiration and encouragement from them as I do.

The secondary aim here was to put across a little of what makes me tick, and share where my motivations and inspirations come from.

However, as I've been writing it a third benefit has come to light. It's made me realise that there's a strong theme running through all of these people. Many of them, in subtly different ways, appear to have the same characteristics, foibles, or anxieties that I see in myself, and writing this post has highlighted that that's probably what draws me to them. It's also what makes them more encouraging to me, as I see them making a success of those character traits. Larry David has made a career writing from his own social awkwardness, and Chris Packham's crippling perfectionism is exactly what drives his pursuit of knowledge and photographic quality to such a degree. I guess what I mean is that it's inspiring to see people use the characteristics I relate to, in order to better themselves and reach their potential. - That's aside from Attenborough of course, who is utterly flawless and peerless.